We Embarked on a cruise to the Faroe Islands for an expedition that incorporated the total Solar Eclipse of 20th March.
This was one of only two locations in the world where anyone would be able to hopefully witness the eclipse in totality, the other being the Svalbard archipelago above Norway.

We headed out early to our location in Torshavn to prepare for the event and arrived at 07.00. The sun was just rising however constant cloud was enveloping the skies and heavy showers persisted until just before first contact.
We knew beforehand that the Faroe Islands were likely to experience about a 30% chance of seeing totality but we still remained hopeful.
First contact began and we were able to view the moon encroaching across the sun through the drifting clouds, however a more persistent band of cloud was nearing the area and it became clear that witnessing the total phase would be unlikely. Sure enough thick cloud covered the sun as totality was due to commence and as disappointing as it was, it was an incredible experience to witness the twilight that followed, celebrated by the cheering crowds also gathered to witness the spectacle.
In just over 2 minutes daylight began to return and with it the clouds began to thin and dissipate. This was to reveal the partial phase of the eclipse that we were able to view and document until its completion almost 2 hours later.
This was spectacular in its own right if not very frustrating as Torshavn was bathed in sunlight as we were now blessed with clear skies. We calculated that the skies cleared a mere 40 seconds after totality was complete!. During totality we could see that there was a pool of light over the harbour to our west and we knew that somewhere on the Islands there had been visible totality.
Indeed when we had returned to the ship we discovered that people had seen the totality from the western Island of Vagar.
Svalbard to the north witnessed an clear uninterrupted total eclipse. 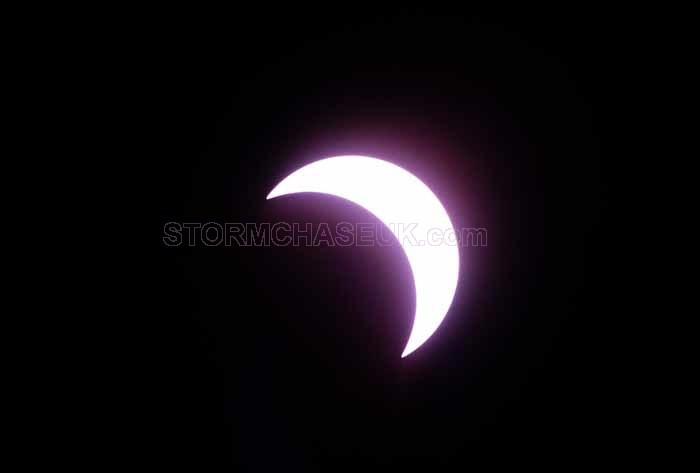