We flew to one of our favourite locations for photographing the Aurora, Iceland, with storm chasing friends Steve Lansdell and Peter Scott, for a week long trip where we would hopefully be able to document this amazing phenomena.

There had been no solar flares in the proceeding days to our trip, and the forecast for the week was generally cloudy so we did not have high hopes for any enhanced Geomagnetic storms, but on our second night on the western peninsular we were to be rewarded with our strongest display to date.

We headed to the outskirts of the town as darkness fell and waited. The cloud cover was to be patchy for the first few hours so we knew we would need to aurora to be most active before total cloud covered the country.

We had noticed via our models that we were experiencing a G2 storm with an enhanced value of KP7, and at about 21.15 the aurora began to become visible and increase in intensity.

We had relatively clear skies so we were able to photograph and video the extraordinary spectacle that was unfolding.

We were joined by new found friends from our accommodation, most of whom were witnessing the Northern lights for the first time and we were treated to a show so bright you could see the colours of the aurora clearly with the naked eye for over an hour.

Eventually the clouds and weather began to close in and we decided our best display was over for the evening.

Even so when we arrived back at our base, we were still able to see the bands of aurora in the breaks in the clouds until the early hours. 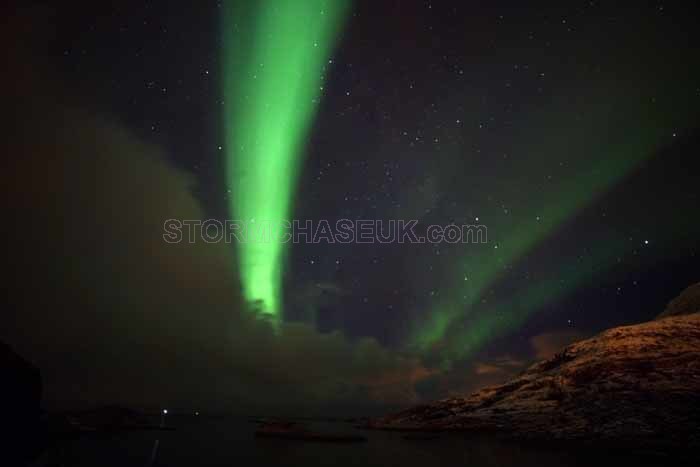