We headed back to Iceland in hope of witnessing the aurora as this year was reported to be the year of the Solar maximum of an 11 year cycle of the sun.
The first evening we were based in Reykjavik and although there was KP value of 4 we thought our chances of witnessing the phenomena would be restricted by the light pollution in the city.
However we were based close to the north facing bay and were able to view the sky with the lights of the city behind us, and we were treated to a vivid green band dancing over the sky at only 8pm. This lasted for around 2 hours until the southerly IMF flipped back to the north and the aurora disappeared into the night.
The following night we headed north to the Snæfellsnes Peninsula for a week of photography and whale watching to the town of Grundarfjordur. We did not even make it to the hotel tonight before the aurora appeared early again, so we pulled over and observed it from the roadside. We got to the hotel as it began to intensify and we were again treated to around 3 hours of amazing activity.
The following night was again clear and with a KP value of 4 and our hopes were high. the aurora appeared early again and produced an incredible display the came right over our location. It was so bright we could see it with the naked eye and the camera easily picked up the intense green bands that filled the sky. This was the most intense display we had ever witnessed!.
The following 3 nights again held potential for anywhere with clear skies, but the skies over Iceland did not cooperate as the country was enveloped by thick cloud. The last night of the trip saw the skies begin to clear and we were able to view a weak aurora display through the breaks in the cloud. A great end to a fantastic trip!. 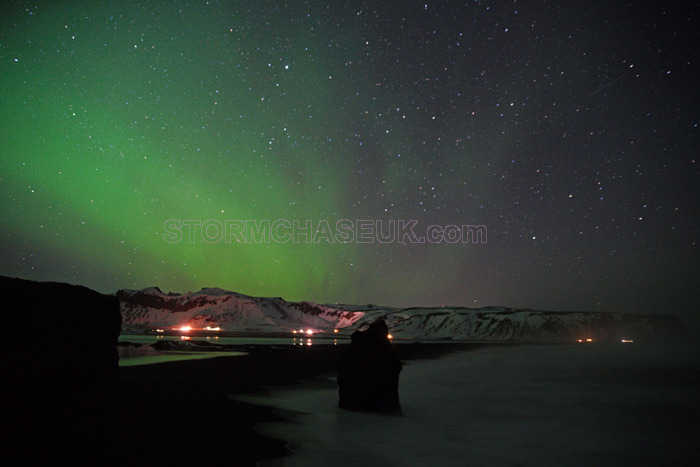