I headed to the SW coast of Iceland for a five night expedition with fellow chaser Peter Scott in an attempt to witness one of natures most amazing phenomena..the Aurora Borealis.

We arrived at our location and headed out at 21.00 but our hopes were not high despite the clear skies as activity was expected to be low with a KP0 value and northerly IMF. However we were rewarded for our efforts as we spotted a band of light on the northern horizon which despite not being obvious to the naked eye was the destinctive green band of the aurora.

It began to intensify as we moved our location and pillars began to appear as the display grew stronger. We continued to shoot into the early hours until the display finally diminished.

The following evening of the 23rd our hopes were high as an M class flair was due to hit this evening with a strong southerly IMF and a KP 5-6 value. However the evening was looking like a failure as we waited staring at a thick cloud bank to the north.

Our patience was to pay off around 2am as the cloud began to clear to our south and west and Pete spotted the aurora to our west moving southwards.

We were surprised to witness it to our south but then realised the aurora had covered our location completely.

The display became more intense and would have been stronger had the moon not risen that night but as the skies cleared sufficiently for us to witness the display for about and hour before it began to fade around 3am. 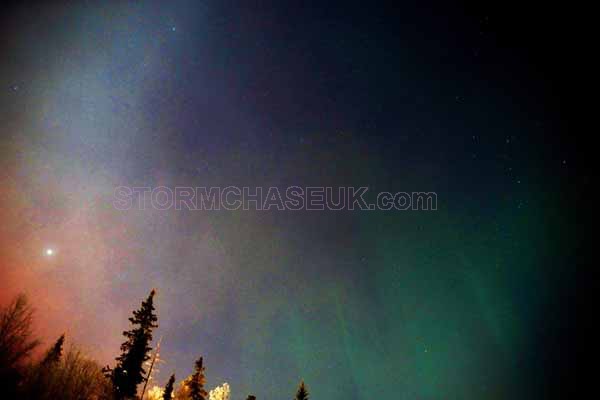